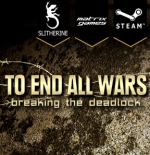 To End All Wars Breaking the Deadlock

When all was quiet on the western front however, both the Central Powers and the Entente kept looking for opportunities gain the advantage elsewhere. Seeking out new allies in the Balkan region, launching campaigns in the Middle-East and aiming for breakthroughs on many different fronts. All this was done with only one goal in mind: Breaking the Deadlock.
To End All Wars: Breaking the Deadlock is the first expansion to the most detailed World War One wargame ever created. Adding 5 completely new scenarios, this expansion aims to vastly increase the content in-game, giving players the option to focus on specific campaigns in Italy, the Balkans and even the Middle-East. In addition, the expansion also allows for the grand campaign to be started in 1916, allowing him to seek out his own opportunities to overcome the stalemate and win the War to End all Wars.

To End All Wars Breaking the Deadlock-SKIDROW